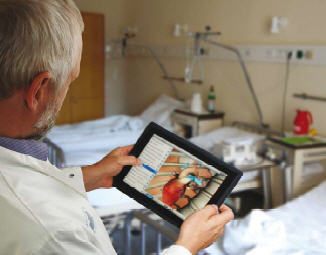 In the last issue I mentioned the plans of my library to lend out iPads “preloaded with a pleopthera of learning tools”. Now I would like to share our first experiences with you (because I know that many of you are curious about the project and its outcome). [See Footnote 10 for other libraries lending out iPads]

Back to the future
We may laugh at the hype about the iPad [1], but tomorrow’s world is just not imaginable without ubiquitous and comfortable access to the Internet and sophisticated applications, which not only facilitate our life but have become a part of it. The iPad is not the absolutely perfect device, but it is a significant step towards one. A successor or competitor with half the size and double the power may come close to the magical capabilities of the all-knowing personal librarian “Mister D.”, which Morgan had described in a visionary essay [2].

When I first heard the rumour about this new gadget from Apple, I was not only fascinated but electrified by the news of a tablet PC with that extraordinary features. Such a gadget could completely change the way we handle information, the methodology of reading books, and how we consume other media! The iPad may well foster the transition from a printed to a digital learning environment and if so will have a great impact on libraries.

Back to practice
With my naïve enthusiasm, I applied for 24 iPads from tuition fees, but was turned down – fortunately (obviously we could not handle that much at that time). After some phone calls, three iPads were sponsored to start with. In August, we began lending them out for a period of one week to researchers and physicians.

With the iPad, it’s pretty much the same as lending out Personal Digital Assistants (PDA). [3] The devices are lent out and withdrawn by a single, appointed staff member, and the lender has to sign a loan contract in advance. [4] In the beginning, only faculty members, not students, were allowed to put their hand on an iPad.

The core of building sustainable customer relationships is to tie the clients in some way to the library. Usually this will be achieved be a good book collection, kind and supportive staff, expertise in searching, etc. In the web 2.0 age this is backed up by promoting services via interactive social media such as Twitter. Another way to attract users is by lending out cool gadgets such as Personal Digital Assistants. But essential for the success of such a service is that the library not only lend out these things, but also provides users with applications and build an expertise around this devices with the result, that the users will always turn to the library for support, new apps, etc. Our PDA project from 2004 to 2008 proved this: the lending part was not our greatest success but in fact the support part of the project was, where we distributed an impressive number of 1,013 apps to 382 clients. I think the iPad project will evolve in similar ways.

What will be our next steps?

Preliminary results
We had a wonderful start in the first 2 months with people virtually jumping on iPads as bears to honey and the feedback has been remarkably positive [7]. All users were clinicians; departments ranging from cardiology, ethics, gynecology, neurosurgery, to pediatrics. Among them were the usual “early adopters” but also newbies. All in all there were quite technophile as more than 80% had smartphones or PDAs already. The service was propagated by word of mouth very well: anybody using this gadget was asked: “Where did you get that from?”

For about 60% of the lenders, iPads proved to be very useful, but for 40% not at all. The reasons why the iPad did not stand the test for almost half of the lenders has to be examined in detail. The lenders used the iPad and its apps for a great variety of purposes: most often E-Books were used, followed by literature search, literature management, lectures, lecture videos, and games. Patient education, diagnostics, or music were not used so often and podcasts or movies rarely.

Magazines and journals, such as Macworld, MedPage, Nature News, NEJM, and PLoS were used more often than communication tools such as newsreader, social networks, and chat apps. Half of the lenders used E-book-reader such as GoodReader or iBooks quite frequently, while the other half did not use them at all. Lecture videos from iTunes University, which we had synced with the iPads, were used only a few times.

From the 75 medical apps preinstalled on the iPads, the well-known literature management app Papers was the most used one, followed by UpToDate (as a app-icon on the home screen), German pharmacopeiae, The Elements, DDx Differentials, PediSafe, and ColorTest.

Overall, more than 80% were satisfied or very satisfied with the opportunity of lending an iPad at the library.

Conclusion
Providing mobile access to library resources is a top trend in academic libraries [8]. Mobile phones are the communications technology of the future [9]. Digital natives expect every information (and person) to be immediately available, e.g. mobile. The iPad is an important step in the direction of an all-mobile world. By lending out iPads, the library can increase their reputation and networking among faculties and clinics. This is an invaluable and easy to achieve opportunity. Building a solid base of expertise around this cool gadget will put a “coolness factor” on the library itself and make it a light house. Hi-tech users accept librarians as peers on the same level and our participation in pioneering projects, such as e-lecturing with iPads or accessing electronic patient records on iPads, has been highly appreciated.

This article was published in the November issue 2010.

Things worth to know [not in the printed issue]

PS: iPads on loan are easily trackable with MobileMe now iCloud, provided the user didn’t delete the respective Account in the iPad settings.