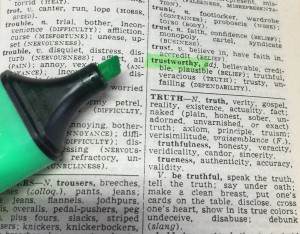 Recently, this important characteristic was neatly summarized by librarian Marcus Banks: “One of the long-prized skills for librarians is the ability to guide people to trustworthy sources. This can happen in multiple ways, either a direct and straightforward referral to a particular source, or (hopefully) via an instructional session that provides people with tools for evaluating the trustworthiness of sources they find on their own. In either case, the librarian is the filter for trustworthiness.” [2]

This may change in the next few years as Google has successfully developed a mechanism for ranking search results by the trustworthiness of the sources. Eventually, this would make the search engine the arbiter on right and wrong. [3] That may put a totally new viewpoint on the Google motto: “Don’t be not evil” [4]. If Google stepped into the trustworthy business, that may change our perception of the world fundamentally, because we see the world through Google eyes. Google increasingly decides what we see and what we do not see [5].

Banks commented: “If the Google team’s proposal goes forward, there would be less need – perhaps eventually no need – for librarians to serve as such a filter. I argue for two actions in a ‘Google trustworthy sources’ era: concentrate on helping people synthesize and evaluate the content they locate, moving into a more pedagogical vein; and intensify our focus on collecting, curating and preserving the unique content of our own institutions. […] Both approaches would demonstrate the continued vitality of librarians in the digital age.”

I hope he is proved right.

This post will be published in the December issue of the Journal of the EAHIL. 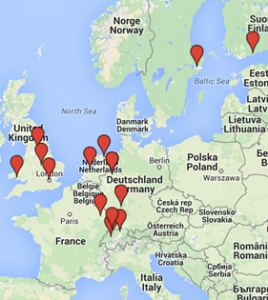 Recently, I was invited to sum up all incentives on mobile technology in our subject area for the summer issue of the Journal of EAHIL. The resulting monographic section was published as Use of mobile devices in medical libraries and medical schools. Alltogether 14 projects were listed throughout Europe.

Actually, the title for the introduction was a two sentences sum-up: „Mobile devices change the way medicine is taught, learned and practiced. That’s a great challenge for libraries“. (PDF) The papers in this special issue on mobile technologies have one thing in common. They all agree that “smartphones and tablet computers have become the new cultural ‘norm’ within personal and professional lives”. Especially tablets are used to enhance teaching, learning and practice of medicine. As you learn in this issue, some European medical schools have already recognized the value of tablet computers in learning and loan them or present them as a gift to students. Six from eight contributions regard tablets, which reflects pretty much the use we all recognize in lectures, libraries, on the ward, on the go. As students use tablets for learning and looking up information, it is clear that this will affect libraries too.

What may the future hold for medical librarians in the age of mobile devices as the new cultural norm?

Some reacted or pro-acted by lending tablet computers, recommending apps, licensing content, or training students in order to make the best of these devices. Some medical libraries have even developed their own apps or written designated iBooks, some – with the help of engaged faculty – are embedding tablets and contents into the curriculum. The projects in this issue present a wide range of interventions in terms of embedding mobile devices and technologies in medical libraries and schools for the sake of the medical education process.

These articles were published in JEAHIL, Issue 2, 2015

For 702 different jobs, the Oxford researchers Frey and Osborne examined the degree of susceptibility to computerisation. With a probability of 65%, the occupation “librarian” was calculated as quite good computerisable (1). How does this translates into the reality of our daily work? Do we now all have to be anxious for our jobs? Fearing that our jobs will get lost? That libraries get extinct?

Yes and No. Let’s take a closer look at the evidence: 1. The Oxford study was published in September 2013. Since then, 11 libraries were closed in Germany. That’s less than 0,1% of the 14.300 German libraries. And the number of employed librarians isn’t shrinking either. 2. The usage of libraries are steady or even increasing as well as 3. the budgets. These three observations are a good indication of the lasting attractiveness of libraries. But what about the attractiveness of librarians? For sophisticated library tasks we are desperately looking for candidates, but simple library jobs may definitely be threatened.

To understand this more clearly, let’s take a look at some other occupations examined by the Oxford researchers: The Watch Repairers and the Taxi Drivers will both be replaced with a probability of 99% and 98% resp., but the Recreational Therapists and the Computer Systems Analysts are totally safe jobs (p<1%). And this is the key message of the report: Watch Repairers and Taxi Drivers do routinely, simple work, which could be easily replaced by automation (watch building/repairing robots) or smart algorithms/services (Google cars, UBER service). On the other hand, the Recreational Therapist and the Computer Systems Analyst are so highly individual and innovative tasks, that nobody can think of a computer algorithm or robot to replace them. We as librarians are somewhere in between these two work groups. Some of us already perform highly ambitious tasks, and some of us do routinely simple tasks. The hypothesis of a two-class system in librarianship is supported by the higher susceptibility to computerisation of “Library Assistants” (95%) and “Library Technicians” (99%) in contrary to the normal “Librarian” (65%). (1)

Is your fate predestined then? One way to success, the other to extinction? Yes and No. There is no such thing as Kharma in librarianship. You can switch to other, more future-ready tasks by your capabilities, training or both. Each and any boss would be happy for such a staff member especially in the present days of rapid change. But: If you work in the acquisition or circulation department it could be somewhat harder. Then you are definitely on the wrong track. Acquisition and cataloguing will be the first tasks to become centralised on a regional or national level; circulation and stacking will be automated by robots resp. replaced by digital content. So my advice would be: If you are in one of these dead ends, ask for transfer to the reference or teaching department or apply for project management for centralisation and automation (remember: be the hammer not the nail).

If you change to the more specialised things such as rare books, that would be really smart. Be sure to collaborate with G.L.A.M. (galleries, libraries, archives, and museums). And if you do old books, mix this up with the latest technology, such as the Bavarian State Library did, which gives away the Gutenberg Bible for free on an iPad.(2) And if you are in reference, become specialised. Don’t do the routine questions, which could easily be automated (Google) or centralised (nation-wide reference), but the ones which are local, customized, cunning, and of high priority. You will find a list of specialisations in the references (3).

Be open-minded in everything (especially the needs of your users) and get trained, trained, trained. Not only by the usual library instructors, but by the very experts in the field, world-wide, which are often no librarians (any more). And do not forget research. For academic libraries, it’s the core of success. For instance, researchers do not have a clue of data management and if they had, they would love a librarian to do it for them, as the computer scientist Daniel Lemire said: “So I think that librarians should move on to more difficult tasks. For example, we badly need help with what I would call “meta-science”. For example, we have collections of papers that refer back to data sets. These data sets are typically poorly hosted, partially replicated, and so on. We badly need to clean up this mess. We need data object identifiers. We need help tracking data sets, their transformation and so on. In effect, I would push librarians into data science. That’s
the next frontier.” (4)